The UGC (University Grants Commission) is working to integrate two of the largest competitive exams in the country into a single test via the CUET (Central University Entrance Test). This will allow merging the admission process of engineering and medical colleges, allowing students to appear for a single test and explore different streams without the hassle of appearing for multiple entrance exams. Given that there is an overlap in the knowledge base of both the tests (NEET & JEE), The UGC has drafted a unique proposal which will give students the freedom to appear for their desired subjects and be considered for admissions based on the relevant streams. 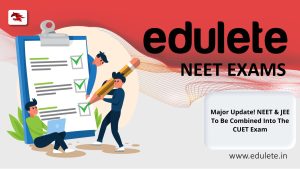 The move is also aimed at simplifying the logistical complexity of the exam by minimizing the number of tests for students. Having a combined exam will also give students a better chance at getting the exam centre of their choice and reduce the burden of arranging computing resources across thousands of centres in India and abroad.

Reports suggest that the UGC is trying to build consensus for the same and is suggesting that the exam can be conducted twice a year (April / May and Nov / Dec).While the intention of the move seems logical, the NTA has been facing various challenges in organizing a multi subject exam such as the CUET. This year’s exam has been getting serious flack from students and experts. Many are also questioning the shifting priorities of education in India making it more focussed on competitive exams rather than a holistic learning curriculum.

How to Get Your First Job in Data Science?

Why should you plan for retirement?

QuickBooks Update Error: Read the Perfect Ways to tackle it